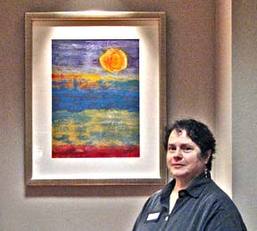 Bobbi A. Chukran is a native Texan, born in Ft. Worth, raised in Grapevine, educated in Austin and now rooted in Taylor, Texas.

Over the years, Bobbi has pursued simultaneous careers in writing, publishing and art.  Her first magazine article was published in 1981, and her first book was published in 1984 (under the name Bobbi A. McRae). Since then she's gone on to write numerous fiction stories and non-fiction books and  articles.  In 2006, Bobbi started writing plays again (something she hadn't done since she was a young child) and since then, four of her plays for youth have gone on to win awards.  Now Bobbi is hard at work on the novelizations of some of her plays and lots of short stories and more books in her "Nameless, Texas" series.

More information on Bobbi's plays can be found HERE.

A great interview of Bobbi by Lois Winston can be read HERE.