Bobbi A. Chukran writes mystery, horror and fantasy fiction--mostly short. Usually with a touch of humor.

* I have a new short story in the FLASH and BANG anthology from the Short Mystery Fiction Society. "The Conflagration at the Nameless Cotton Gin" is a related story to my other Nameless, Texas stories. Buy it here, from Untreed Reads.

* A new short story was just published in DARK ECLIPSE e-magazine. "Family to the Bone" is a horror/suspense story, Texas style! November, 2014.

* A short story/essay, "Mantis Attack!" was published in SEEDS, the e-zine from Texas Gardener magazine.

Available for the Kindle and Paperback on Amazon.com
http://amzn.to/11qAZmQ

When Dorothy Norton (Dot) returns to her parent's home for the holidays and gets bonked on the head by a VW-wielding neighbor, all sorts of strange things are set in motion. From a traditional Christmas turned upside down to a Santa Clause that is not your typical ho-ho-ho jolly old elf, this hilarious tale will make you laugh out loud and maybe even lose a bit of your eggnog. Rated PG. 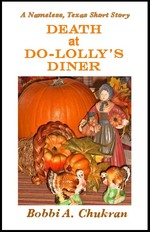 Available for the Kindle on Amazon.com

When Norma Curtis, a belligerent, demanding customer, keels over after eating at Lolly Larue's downtown "Do-Lolly's Diner" and has to be hauled away in an ambulance, people think she choked on a piece of coconut pie. After Ms. Curtis dies at the hospital, Sheriff Lyndall Tinker, Kendra Louise Harper and her quirky sidekick, Jeremy Clifford, put their heads together to find out what really happened. Filled with the signature humor and quirkiness of the author's other "Nameless, Texas" tales, Death at Lo-Lolly's Diner will delight fans of the series. App. 4,000 words
* New Short Story Collection Published!

Thrillers! Ghosts! Campy vamps and West Texas zombies! New tales and several previously published online you'll love to read. Guaranteed to give you a few goosebumps (and maybe even a few laughs). 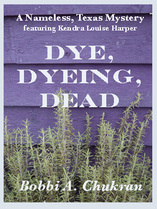 Available Now at these Online Retailers:

Kendra Louise Harper is a folklorist, avid gardener and accidental sleuth. All she wanted to do that nice fall day in September was help her Aunt Jewel conduct a Natural Dyeing with Plants workshop for some ladies from the Nameless, Texas Garden Club. Before the workshop is over, a dead body lay face down in a pool of glass and indigo in Kendra's courtyard garden.  The neighbor blames Aunt Jewel, but no one else really believes she killed Mrs. Bunch--that is, except the sheriff. And he's the one who counts. Kendra decides that if anything is going to be done to get her aunt off the hook, she'll have to do it.
* Vampire Spoof, THE JOURNAL OF MINA HARKER, Published! 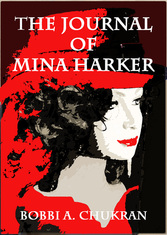 Inspired by the classic DRACULA by Bram Stoker.  This is DRACULA like you've never seen it before. Who IS the mysterious Count Dracula that purchases Carfax Abbey, near Dr. James Seward’s “bloomin’ looney bin” of a home, outside London? Is he a blood-suckin’ fiend, or just a nice older gentleman who loves a good meal, creeps about in the middle of the night to borrow an onion from a neighbor, crawls up the walls of his castle, loves nicely ironed shirts, drinks copious amounts of wine, and wants to make sure his new home near London has nice curtains?

Or is there something more sinister going on?

Read The Journal of Mina Harker to find out!

And who is the zany Mr. Renfield? A poet who loves mice? Be careful what you say around him! You’ll laugh ‘til your sides split at his antics---and he’s “Doin’ the Renfield Rap!” But watch out---NEVER mention the word . . . FLIES! around him.

Delightful word play, a cast of quirky, crazy characters…and yes, there are the required flapping bats and howling wolves…that’s The Journal of Mina Harker.

Amazon Reviews for THE JOURNAL OF MINA HARKER:

Dracula ala Mel Brooks!
If you laughed at "Young Frankenstein," you'll love this twisted take on "Dracula." The plot and characters are straight out of Bram Stoker but with a wickedly funny slant. Renfield is a scream!

5.0 out of 5 stars Funny and Entertaining! October 17, 2011
This was fun to read and very entertaining. The characters, especially Renfield and Lucy, were a hoot!

5.0 out of 5 stars
The Journal of Mina Harker is definitely a play schools should consider for production. It's funny, sly humor with some broad humor thrown in for contrast, and the familiarity of the Dracula legend makes for good fun and crowd pleasing potential. Reads well and will play even better.

Available on Amazon.com for the Kindle

When Dewey decides that his grandma’s old pecan tree has to come down, he won’t take no for an answer, in spite of her protests. Pretty soon, his hilarious redneck network is on hand to help with the process.  After a series of unfortunate accidents, and a mysterious illness, Dewey is reminded that sometimes it’s best to leave well enough alone.